I am Grey Eagle of the Florida Wolf Clan . Though I'm not sure what on earth for, Chief Man Many Trees has asked me to put a brief profile of myself on the website. 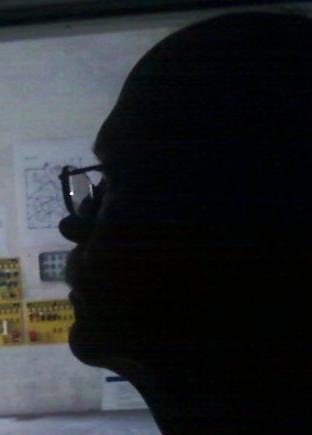 I don't wear briefs, but here's a profile anyway.

When I was a kid, my father's grandmother told me I was part Cherokee. This peaked my interest to learn about the Cherokee. In those early years, I didn't find out much. It wasn't till I was able to visit the Qualla Reservation in North Carolina and buy a few books, that I learned more.

From my earliest years, I have also had great love and appreciation for the outdoors. Heaven to me was any unspoiled wilderness setting. It came as no surprise to me that American Indian cultures also had this appreciation and respect for Nature.

I was disappointed in my teen years to learn that there was insufficient documentation of my Cherokee heritage to be enrolled. (This was long before the Casinos, etc., and I knew nothing about Federal programs for Indian people. I just wanted the tangible connection with my heritage.) I gave up on the idea of being "officially Indian". I contented myself with my inner knowledge of my heritage, book research about the Cherokee, and I continued to live out and expand my love of the outdoors.

Much of my formal training in outdoor skills came through the Boy Scouts, where I earned the rank of Eagle Scout as well as receiving the Vigil Honor in the Order of the Arrow. I remained active in Scouting as an Assistant Scoutmaster while in college and the Air Force, and was briefly a Scoutmaster after leaving the Air Force.

I graduated as a Physics major from Georgia Tech, where I also first started skydiving. I was a physicist in the Air Force. (If I told you much more about my Air Force work, I'd have to kill you - so I won't.) I currently work on lasers at Universal Studios in Orlando.

Despite my technical background, I have maintained my love and respect for Nature. I am most at home spending quality time in the wilderness. Chief Man Many Trees likes to brag about me going into the Everglades with only a knife and a breech cloth. No disrespect toward the Chief, but he's exaggerating just a little - I usually go without the breech cloth. All seriousness aside, I have camped that primitive at times, but on routine trips I do take a tent, miniature stove, etc. Sometimes I take my sailboat out for days at a time, sleeping aboard the boat. Often I have Ham Radio equipment along, and make worldwide contacts from a small tent or boat in the middle of nowhere!

In 1992, I bought a piece of Florida wilderness. It was 20 acres of literally untouched Florida. Never cleared for timber, citrus, or farming. I named it Jororo Woods aftef the original tribe living in the area (pronounced Hororo). I have done two Vision Quests there. It is available to anyone who contacts me and wants to primitive camp or do their own Vision Quest. For that matter if you're interested in a Central or South Florida wilderness trip, you can contact me.

Oddly enough, my wife Patty, who has no American Indian blood at all, is responsible for getting me actively involved in my Indian heritage. I had told her about my heritage when we were dating, and how I wished I could have partaken in it. She asked if I had been to any Pow Wows. I had heard about them, but figured I would be an outsider, and had not gone to any. She insisted I go to at least one.

There was a Pow Wow happening on our wedding day. She made it part of our plans. After the reception, we changed clothes, and went to the Pow Wow! It wasn't what I expected. I got hooked. We attended Pow Wows regularly, and I began making regalia.

A few years later, after we had decided to adopt a child, the case worker who interviewed us noticed my Cherokee books, my crafts and regalia, and told us that he thought we would be a good family for a boy he was trying to place who was half Cherokee.

When Jonathan came to us, he had never heard of the Cherokee before.None of his foster families had ever told him about his heritage. Introducing him to his heritage got our family involved with his dancing.

Through the Talako Indian Dancers, we were introduced to a local Lenni Lenape clan, who conducted Naming ceremonies for the Talakos. My son and I were both named by the Lenape Turtle Clan.

Shortly after this, we heard about the Florida Wolf Clan of the Overhill Nation forming near our home. My son was renamed in the Wolf Clan, and you now know him as Hawk Dancing.

How was that, Chief?

(OR USE YOUR BROWSER'S BACK BUTTON TO RETURN TO PREVIOUS PAGE